With Black History Month upon us, we see an opportunity to bring to light many stories and voices that have been left in the unnoticed throughout American history. The New York Times details 6 Black Chefs who changed the culinary world as we know it. Next time you ask for a side of fries, think of James Hemings.

Honoring the Impact of Black History on the American Food Scene

The following story has been derived from the New York Times article, "6 Black Chefs (and 1 Inventor) Who Changed the History of Food."

Thomas Jefferson was appointed commerce minister to France in 1784. After, he and Hemings, then 19 years old, set sail for Paris. This is where Hemings began his cooking career, becoming the first American trained as a French chef. He studied in prestigious French kitchens and trained with a master pastry chef. His most important experience, however, came from the chef at the Château de Chantilly. At the time this venue was considered to have better food than Versailles. James Hemings is not only a prominent culinary black history figure, but an individual who impacted the diets of Americans for years to come.

In 1787, Hemings became the chef de cuisine at Hôtel de Langeac, Jefferson’s personal residence. While there, he cooked for many politicians and celebrities. He later would make the dinner for the historic meeting between Jefferson and Alexander Hamilton in Virginia, where the two men engaged in political negotiations despite their longstanding feud.

Hemings was freed in 1796. After some travel, he returned to run the kitchen at Monticello, Jefferson’s home in Virginia. In 1801, he committed suicide. While his time as a free man was short, his legacy has proved to be long.

Agricultural scientist, inventor, the peanut man: George Washington Carver is remembered for many things, but his contributions forever changed how many modern industries are run. Carver was born into slavery in the early 1860s, and went on to earn a master’s degree in agricultural science at Iowa State Agricultural College (Iowa State University today). In 1896, he moved to Alabama and became the director of agricultural research at the Tuskegee Normal and Industrial Institute. There, he focused on projects to improve Southern agriculture.

Through his research, he discovered that cultivating only one crop stripped the land of its nutrients and yielded less bountiful harvests. By introducing peanuts and soybeans to the nutrient-deprived soil, crops could thrive again. This was a discovery that also could feed many more Southerners. Once farmers integrated crop rotation into their fields, the South became the new strong supplier of agricultural products.

You may have heard Carver’s name associated with peanuts (boy, did he love them). Contrary to popular belief, Carver did not invent peanut butter. But, he did develop more than 300 other food, industrial and commercial items with peanuts. These items included plastics, dyes, soap, milk, cosmetics, and more. He also invented 118 products from sweet potatoes, including molasses and postage-stamp glue!

After Carver died in 1943, President Franklin D. Roosevelt had a national monument built for him. This was an honor that, before then, had been reserved only for presidents.

Zephyr Wright drew in crowds with her comfort food.

In 1942, she started working for the Lyndon B. Johnson as a maid and cook to help pay her way through college. She ended up staying with the family until 1969, through the duration of Johnson’s presidency. While Johnson was in Congress, his home quickly became known for its food. Other politicians visited regularly and built relationships over Wright’s chile con queso and peach cobbler. Lady Bird Johnson once wrote, “I have yet to find a great chef whose desserts I like as well as Zephyr’s.”

Wright was believed to have told Johnson of her experiences with discrimination. When Johnson signed the Civil Rights Act of 1964, Wright was there. After he finished, he gave her a pen he used and said, “You deserve this more than anybody else.”

Abby Fisher was known for her southern cooking, particularly her pickles and preserves. In 1880, after winning a bronze medal at a fair in San Francisco, the jurors said, “Her pickles and sauces have a piquancy and flavor seldom equaled, and, when once tasted, not soon forgotten.”

Fisher learned to cook in plantation kitchens in the South, where she developed her distinctive style. After the Civil War, she moved to San Francisco and opened a preserves business. Those close to her encouraged her to publish a cookbook. Because she could not read or write, she ended up carefully describing her recipes to writers who assembled the book for her. “What Mrs. Fisher Knows About Old Southern Cooking” was published in 1881. It included 160 recipes, corn fritters and okra gumbo among them. You can get lost in it yourself.

Edna Lewis grew up on a farm, where she first learned to cook. Eventually, she made her way to the city of New York. She worked a series of different jobs until she began cooking at Café Nicholson in Midtown Manhattan. They offered a simple menu of dishes like biscuits and herbed roast chicken. Quickly becoming a local legend, she cooked for the likes of Salvador Dalí and Eleanor Roosevelt.

She left Café Nicholson in 1954 and started catering, while also teaching cooking classes in the American Museum of Natural History. About 20 years later, she wrote “The Edna Lewis Cookbook.” She began working with the renowned editor Judith Jones on a second book. After Jones pushed Lewis to find a more distinctive voice, “The Taste of Country Cooking” was born. This book would become Lewis’s most significant cookbook. It expanded on her Southern roots and how she would grow, harvest and cook what they planted in Freetown. It is celebrated for its focus on the simplicity of Southern food and emphasis of farm-to-table eating. Her take on southern food has not only influence black history, but deeply impacted a more inclusive American history.

She went on to publish “In Pursuit of Flavor” in 1988, and “The Gift of Southern Cooking,” written with Scott Peacock, in 2003.

In 1955, Rosa Parks refused to give up her seat on a bus in Montgomery. Shortly after, bus boycotts began around the city. The Brenda’s Bar-B-Que Pit staff helped organize parts of the boycott, which soon propelled the civil rights movement into the national conversation.

Jereline and Larry Bethune first opened the restaurant in 1942. Back then it was a nightclub, the Siesta Club, that also sold food. It later became Brenda’s, named after one of their daughters. A pivotal location in black history, the restaurant became an unofficial center for the local civil rights movement, holding N.A.A.C.P. meetings, printing fliers and planning protests.

Even after the bus boycotts, Ms. Bethune quietly held lessons to teach other African-Americans to read so they could pass the literacy test. At the time, this functioned as a way to suppress the black vote during the height of the Jim Crow era. Donetta Bethune, the Bethune's granddaughter, described it as: “Let’s learn how to read. Let’s learn how to vote. Let’s go after our own rights so we never have to be treated in a way that we’re not equal again. In the black community, that’s how they lived back then. Everyone helped each other, or else how could you get by or how could you make it through.”

Brenda’s is family-run to this day, and it still feeds locals its popular ribs, pig ears and chopped pork.

Black history month gives us an opportunity to pay tribute to the generations of Americans who have struggled with racial adversity. College Chefs is proud to say we are working towards #fairkitchens for all people of all genders, races, sexual orientations and what ever demographic descriptor you can imagine. We all share a passion for the craft of the culinary arts and honor those who have paved the way for culinary experimentation. Our Instagram, Facebook and Twitter are always up to date with what's going on in our world. Let us know how your celebrating Black History Month by sliding in our DM's! 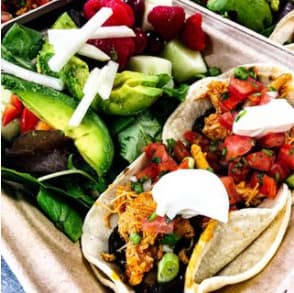 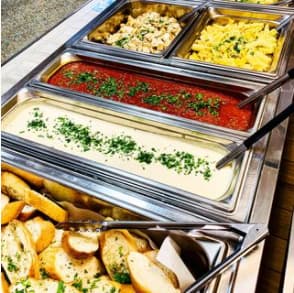